Filmmaker Alfonso Cuarón last wowed audiences with 2006's visually impressive Children of Men. Before that, he filled out his filmography with a diverse selection of projects, including A Little Princess, Great Expectations, Y tu mamá también and Harry Potter and the Prisoner of Azkaban (which is, for my money, the best-made film in the franchise). His first film, Sólo con tu pareja (Love in the Time of Hysteria), is a hidden gem; a well-crafted sex comedy which showcases the talent that would unfurl into one of the most impressive directors to come out of Mexico in recent years (Cuarón is joined by his friends Alejandro González Iñárritu and Guillermo del Toro as the most well-known figures of this group).

Cuarón, with the help of cinematographer Emmanuel Lubezki, sets his story in a cool, green-tinted contemporary Mexico. The "hero" is Tomás Tomás, writer for an advertising agency, charming bastard and modern day Don Juan. He is played by Daniel Giménez Cacho with all the shameless charisma to be expected from a character like this (one could perhaps think of him as a Spanish, less repugnant Tucker Max). The film chronicles a series of his amorous adventures and, just maybe, a major turning point for Tomás.

Despite its sometimes grim content (including an AIDS-related scare and plenty of suicide threats), there is never a moment when you forget you're watching a comedy - and a damned funny one at that. The film was written by Cuarón and his brother, Carlos Cuarón, who make sure the humor gains momentum in the right places and never lets up for too long, and they craft some absolutely priceless and zany situations that Tomás continually gets himself into. Perhaps the best one uses the classic setup in which the protagonist must be in two places at once, forcing Tomás to shuffle from one apartment to another on a precariously small ledge outside his apartment building. While doing this, juggling two women at the same time, he suddenly lays eyes on yet another one through a window - the stunning airline stewardess Clarisa (Claudia Ramírez). From that point onwards, Tomás declares himself a changed man; one who (according to him, whatever that's worth) is feeling true love for the first time. His awkward meetings with and attempts to win over Clarisa are further complicated by a former lover's (Dobrina Liubomirova) plan to exact a little payback. The film's English title is indeed an apt one, as Tomás consequently becomes consumed with hysteria-laced despair, setting in motion yet another chain of hilarious events throughout the film's final act.

Sólo con tu pareja is chock full of several entertaining ingredients that help make it such an engaging film. Tomás' best friend, a doctor by the name of Mateo Mateos (Luis de Icaza), provides plenty of comedic padding and shares many great small scenes with Tomás. A few times in the film, Tomás engages in a morning ritual that seems to reinforce his hare-brained egocentricity: a sprint down to his apartment's ground floor to fetch the paper - clad only in a pair of green running shoes. At moments when he seems most frustrated or desperate, he obsessively arranges little cone-shaped paper cups around his apartment. It is a delight to behold a character so fully fleshed out and bearing all these behavioral quirks, and it is a tribute to Cacho's acting talent and the Cuaróns' strong writing that Tomás is, in spite of his chauvinistic habits, so damned likeable. To top it off, Cuarón uses the music of Mozart to set just the right tone for his film, providing a calm and often poetic effect to balance the chaotic proceedings.

This one was another of those films that I was meaning to see for the longest time, but simply couldn't for one reason or another. I was thrilled when it became the next film in my Zip (the Canadian equivalent to Netflix) account to be sent to me, and after finally seeing it, I decided it was well worth both the wait and a mention on this site. I heartily recommend it and can't wait to add it to my DVD library.
Posted by Marc Saint-Cyr at 9:20 PM No comments:

This next film comes from my home country, Canada, and it makes me rather proud. The Tracey Fragments is truly Canadian not just in terms of origin, but also because it perfectly represents the unique, unconventional tendency that is inherent in our national cinema from the experimental works of partners Michael Snow and Joyce Wieland to the tales of "the new flesh" from David Cronenberg to the eccentric delights of Winnipeg-born mad scientist Guy Maddin (of course, there are plenty of films of ours out there that bear the embarrassing signs of having tried to imitate the formula or style of Hollywood films - the fact that these films are often not very good should be taken as a sign that Canadian film is better off doing its own thing instead of following in its Southern neighbor's footsteps). And what's more, this is a film worthy of celebration not just because it is different, but also because it is a brilliant, beautiful piece of work which owes a significant amount of its success to its uniqueness. In other words, it conducts a completely successful marriage of style and substance (as opposed to using style for its own sake), producing a totally distinct and powerful artistic experience. I honestly, truly believe that The Tracey Fragments is one of the most original cinematic expressions to come in a long time and just as much of a revelation in film form as Breathless. 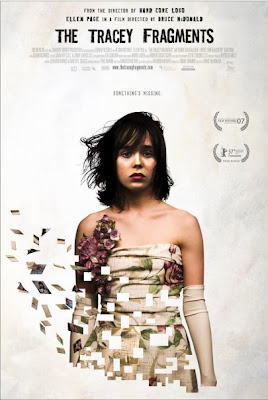 The linear storyline of this non-linear film is as follows: teenager Tracey Berkowitz (played by Ellen Page at the height of her acting talent thus far) is stuck in an unhappy life. Her parents are distanced and emotionally unstable, and she is constantly tormented at school. To top it off, she has hypnotized her little brother Sonny into thinking he's a dog. One day, Sonny goes missing, and Tracey sets off through the urban landscape (the film was shot in Toronto and Hamilton) to find him, encountering a variety of characters and coming to terms with her past, decisions and feelings in the process.

This would be decent enough material for a "normal" film, but what sets The Tracey Fragments apart from the pack is its use of multiple frames on the screen almost entirely throughout its duration, allowing the filmmakers a greater degree of creativity in depicting Tracey's emotional and mental states and viewers some choice in how they watch the film (i.e. which frames to concentrate on at any given moment). The film was shot on digital cameras in two weeks, but apparently took nine months to edit. However, if the emotional punch that the film packs is any indication, the time spent was well worth it. In addition to the multi-framing device, The Tracey Fragments employs eloquently-written monologues from Tracey delivered through voice-over and direct address to the camera that provide searing, revealing insight into the young protagonist and her thoughts and feelings surrounding the people she knows and meets and situations she experiences. Though it tells a story, The Tracey Fragments first and foremost immerses the viewer into its main character in a way that has never quite been accomplished in film before.

In a way, The Tracey Fragments can be seen as a worthy successor to David Lynch's 2006 film INLAND EMPIRE. It too was shot on digital cameras and focuses on the psychology of a female protagonist, but it is often quite murky and too strange for its own good - even for viewers expecting the typical strangeness of its eccentric director. Still, that film was a brave and admirable first step in a new direction in filmmaking possibilities, and The Tracey Fragments makes the next logical step forward with a great deal more effectiveness.

To see this film is to open one's mind to the possibilities of the cinematic art form and be swept up in a beautiful, lyrical work of art. Through the power of its lead performance and the ingenuity and strategy of its editing structure, The Tracey Fragments brings its title character to life with an unparalleled potency. For those who have ever been curious about the possibilities of cinematic experimentation or the still new and strange world of digital cinema, those who can't get enough of Ellen Page or who are curious to see if she can go beyond the spunky, likeable characters she plays in Juno and Smart People, or those who simply seek a profound, poetic movie-going experience, I have only three words for you: see this film.
Posted by Marc Saint-Cyr at 6:35 PM 2 comments:

Hello readers! I've safely returned from my month-long trip through England and (mainly) France, and it was awesome. I'm currently working on cleaning up a few of the 1,400 or so photos that I took throughout my journey and getting them up on the blog, so hang in there; lots of tasty pics are on the way. 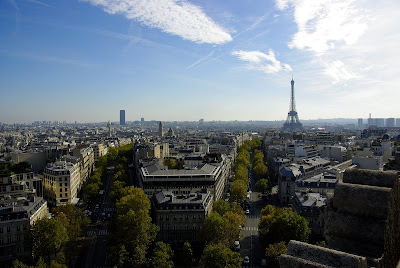