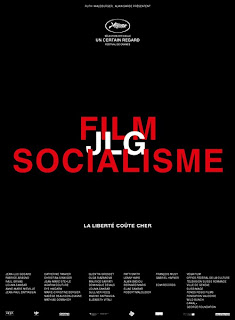 Quite fittingly, Jean-Luc Godard’s already-notorious Film Socialism was the last film I saw at this year’s Toronto International Film Festival. Having read reports of its difficult qualities (on top of being fully aware of his work’s striking transformations over the course of his career), I knew I was in for a rough ride when I walked into the theatre, and even had in mind the famous credits that accompany his 1967 film Weekend: “End of Film,” “End of Cinema.” Those words quite definitively marked the end of a remarkable run of films that at once reflected and defined the decade in which they were made. But anyone willing to follow Godard beyond then would have to turn away from Jean Seberg, Jean-Paul Belmondo, Anna Karina and all other traces of romanticism from that phase of his work as he delved deeper into political theory, philosophy, video technology and an increasingly experimental style that tossed conventional narrative techniques out the window.
Depending on what you read, Film Socialism is reported as being either Godard’s final film or one of several final films. Constructed as “a symphony in three movements,” it begins on a cruise ship traveling on the Mediterranean Sea, which the filmmaker poetically portrayed in Contempt and Pierrot le fou. Here, it is captured in high definition video as a cruel place of crashing waves; a raging, terrifying void stretching as far as the eye can see. Using a variety of cameras that range from crisp and clear to crude and blurry, Godard and his film crew show the ship’s passengers as they engage in numerous activities: eating in decadent restaurant settings, playing in an on-board casino, visiting a crowded swimming pool. Godard’s disgust for the relaxed, unsuspecting people who pass before his lenses is detectable, as is his barbed critique of the realm of wealth and ignorance that they inhabit. Twice, he cuts away to a dance club comically rendered via pixel-strewn video as a chaotic, hellish realm of flashing lights and deafening noise – clearly a poke at what the young people of today’s age do for entertainment. At certain points, people clearly enlisted as actors (though it can’t be said that they are portraying actual characters) appear: a man who frequently snaps pictures, a woman who mournfully talks about Europe and points to something in the distance, a girl who contemplates an amusing Youtube video of talking cats. There are vague allusions to the Nazis, Spanish gold and the invention of Hollywood by the Jews. 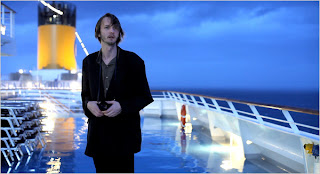 At this point, I should mention one of the more daunting (and talked about) features of Film Socialism. At Godard’s request, the English subtitles of the film have been considerably modified to the point that each sentence only ever consists of a handful of words (mostly nouns). Apparently a form of Navajo English, this fragmented language is bound to be the final straw for many an already frustrated viewer – and it already has been at several previous screenings in film festivals around the world. Yet it also undeniably adds a game-like quality to the film as it asks – nay, forces you to decipher the images and selected words that appear before you while also inviting a deeper consideration of language and articulation – subjects Godard has been tackling throughout his entire career. Regardless of how you choose to react to them, the partial subtitles become much more problematic by the second movement, which shifts from the ship to a lonely country gas station run by a family currently being shaken by a number of politically charged occurrences. The mother is a candidate in the upcoming elections while her young son and teenage daughter demand a serious consideration of Liberty, Equality and Fraternity and stop using the verb “to be.” The girl keeps company with the family llama (they also own a mule) by the gas pumps and determinedly reads Balzac instead of helping customers. Meanwhile, the blond-haired boy is centered amidst moments of humor and contemplation as he conducts an imaginary orchestra, paints a Renoir from memory and thoughtfully listens to a piece of classical music, a jazz piece and a political monologue whilst blowing bubbles in his milk. A white journalist and black camera operator (both women) document the family’s activities, questioning and recording them. This passage is the closest Film Socialism ever comes to being an actual narrative, and while some viewers have complained of it being monotonous, I found that an engaging quality emerged from watching these people (I again hesitate to say “characters,” and Godard himself has said that “the scenes stop before the people become characters”) as they interacted with each other – even if I couldn’t entirely understand everything that was said.
The final movement is a collage of images that has been drawing many comparisons to Godard’s lengthy film essay series Histoire(s) du cinéma. The main subjects are “six sites of true or false myths,” including Egypt, Palestine, Odessa (along with, yes, the stone steps where Eisenstein shot the famous massacre sequence for Battleship Potemkin), Hellas (Greece), Naples and Barcelona, all of which explored through scraps of both original and found footage. Two words not unlike those at the end of Weekend bring Film Socialism to a close: “No Comment.” 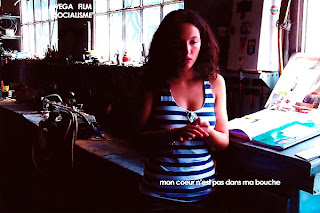 Understandably, I’m still finding it hard to sort my exact feelings about Film Socialism. At the very least, I can say that I somewhat disagree with all the critics out there who are flat-out rejecting it or simplistically summarizing it as merely a middle finger defiantly pointed at the audience. Yes, there is an undeniable quality of unfriendliness about the film, but that’s something Godard has developed and incorporated in his works for ages. Part of what defines Godard’s work is its intentional difficulty; its unwillingness to be easily defined or understood according to rules of conventional film spectatorship. You don’t have to like or agree with this mentality by any means, but if you’re walking into a late Godard film, you have to understand that this is what you’ll be subjected to for its duration. Additionally, while he is making these daunting choices about how Film Socialism will be viewed (especially for English-speaking audiences), the film is by no means entirely incomprehensible or without form or coherence – case in point being the three-part structure that takes you from floating pleasure palace to domestic setting to wind-swept shores of history. While difficult if not impossible to peg down the maker’s precise intentions, there is nonetheless a lot to think about and even appreciate. In the second category, one can easily include the film’s undeniably beautiful images of the blue and yellow ship, the vast expanses of sea and sky stretching beyond it and the different rooms and spaces of the family’s household. There is even something resembling a nice character moment when Godard lingers in extreme slow motion on the smiling face of the teenage girl.

In conclusion, if you’re considering giving Film Socialism a watch, it’s worth keeping in mind that there are challenging films, there are challenging films, and then there’s Godard. There are some films out there like Alain Resnais’ Last Year at Marienbad, David Lynch’s Mulholland Drive and Christopher Nolan’s Inception that require their audiences to think a little differently, but nonetheless can be extremely rewarding to those who approach them with an open, eager mind. Such films are closer to puzzles than stories, and in turn are more ideal for being played with than simply watched. Film Socialism should be approached with the same mentality, but with the crucial caveats that a) Godard’s considerations for his audience are pricklier than most other cinematic tricksters’, b) his particular rulebook for the film has intentionally had some of its pages ripped out, and c) his intended messages are perhaps inevitably going to be murky, unfocused and scattershot. Whether people have the patience or tolerance for such characteristics is entirely up to them. Personally, I am willing to accept (though not entirely embrace) the challenges of Film Socialism and approach it as an intriguing puzzle, but there are indeed far more pleasant ways to be engaged by a film. Take, for example, Apichatpong Weerasethakul, the Thai filmmaker who has thus far taken the film world by storm with an assortment of odd, unconventional “mysterious objects” that are also filled with a warmth that is extremely alluring and pleasing. Watching one of his films is like sipping a pleasantly intoxicating liqueur. Film Socialism, for all of its infinitely more hard-won rewards, is more like gargling vinegar. Take from that what you will, I guess. Just don’t say I didn’t warn you.

Posted by Marc Saint-Cyr at 9:28 PM No comments: