Hello all. As promised, here I am with my final post of 2010 - which, overall, I found to be a pretty good year. Certainly two big highlights were the Nippon Connection film festival, which I attended in Frankfurt, Germany with my good friend and whip-crackin' editor Chris MaGee of the Toronto J-Film Pow-Wow, and the Shinsedai Cinema Festival, which was co-programmed by Chris and Midnight Eye's Jasper Sharp. I was quite busy during Shinsedai this year, namely with two assignments. Throughout the fest, I reported on the films I saw with the VCinema Podcast's producer and host Coffin Jon Jung, which was a ton of fun (click here for links to the festival coverage episodes). I was also asked by Midnight Eye to do an interview with Gen Takahashi, who was in Toronto to present his excellent film Confessions of a Dog. The result was an informative conversation with a true maverick of Japanese independent cinema - and a very, very nice guy. Check out that interview here. 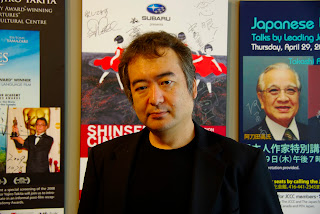 Confessions of a Dog writer/director Gen Takahashi at the 2010 Shinsedai Cinema Festival
Before finally signing off for the remainder of the year, I'll share my list of the 20 favorite films I saw in 2010. There are some noticeable films missing from the list - simply because I haven't had the chance to see them yet. Thus, you won't find The Social Network, True Grit, 127 Hours, The American nor Enter the Void. Plus, it should be mentioned that this list was arranged according to my own personal tastes - not what I believe to be the "best" films of the year. In other words, these are the 20 flicks that simply tickled my fancy the most. 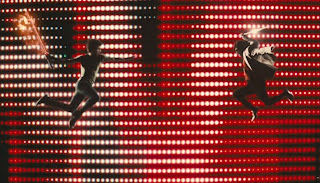 If you're curious, check Row Three within the next few days to see how my picks match up with those of the other writers for that site.

Well, with all that said, I hope everyone has a very happy New Years celebration, wherever you may be spending it! After my soon-approaching trip to British Columbia (which will take me away from the comforts of the GTA and into the rainy wilderness of the West coast for two weeks), I'll start off the new year with a gathered list of fond memories that truly made 2010 special. See you in 2011!
Posted by Marc Saint-Cyr at 3:40 PM No comments:

Hello all! It has been a long break between drinks, but I'm back to put up a few more posts before the end of 2010. Soon, I'll post my favourite films of the year, but for now I just wanted to share a pair of great fan-made movie montages that I've recently discovered and been digging a fair bit.

The first is dedicated to a Japanese filmmaker whose work I really need to see more of: Hirokazu Kore-eda. So far, I've only seen Nobody Knows and Maborosi - both stunningly moving films that clearly indicate his status as a true master. I'd most like to see next his highly acclaimed After Life and the more recent Still Walking, which will be released by the Criterion Collection on DVD this upcoming February. Youtube user Kornspel put together a great tribute to his filmography using carefully selected scenes and the music of World's End Girlfriend and Mew. Check it out:


This next video is a great tribute to the use of color in film over the years which covers many different genres and nationalities of cinema and puts to good use a couple of songs from Plants and Animals' album La La Land. It was made by none other than my good buddy and fellow Toronto J-Film Pow-Wow AND Row Three writer Bob Turnbull. After taking in Bob's impressive cutting handiwork, check out his blog, Eternal Sunshine of the Logical Mind.

Again, stay tuned for my inevitable end-of-year list of films. For now, though, I hope you enjoy the above vids and, furthermore, have a happy and safe holiday season and New Year celebration!
Posted by Marc Saint-Cyr at 9:38 AM 2 comments: