I've been venturing out to the movie theatre quite a bit recently, catching up on some of the high points of the past year and decade (the latter thanks to the Cinematheque Ontario's Best of the Decade program). As a result, this post is a small cinematic cornucopia of sorts, focusing on four very different, very good foreign films I've seen in the past few weeks. 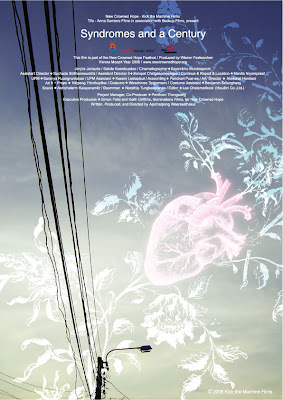 After having missed it when it first appeared at the Cinémathèque Ontario, I was very glad to finally see what many are calling the best film of the decade. I had heard much about Apichatpong Weerasethakul and the fresh, idiosyncratic quality that defines his films, and discovering both for the first time was a genuine pleasure. On the surface, Syndromes tells two parallel stories. One is set at a hospital in the countryside and follows one man as he tries to confess his love to a doctor who works there, while the other relocates to a more sterile hospital in the city, containing some elements from the first part while moving in a different direction. This interesting, unconventional dual structure invites a fair amount of pondering, not least of all over the differences between the rural setting and the urban one. The film all but begs for multiple viewings, which are sure to offer new discoveries, rewards and revelations. I'd love to see it again if only to take in its warmth and compassionate worldview, which is often reminiscent of Ozu and Truffaut. There are virtually no villains to be found, but instead one fascinating character after the next. My favorites would probably be the Buddhist monk who dreams of being a DJ and a dentist who sings country songs in a green jacket in his spare time.

Mystifying and compelling, Syndromes adopts a Murakami-like approach to narrative, following its own course and taking many unexpected twists and turns, often in directions entirely unanticipated by the viewer. There are also hints of Weerasethakul's background as an avant-garde artist, leading to moments of contemplation and tranquility all too seldom experienced in films.

Now that my curiosity has been temporarily satisfied, I am quite eager to see both more of Weerasethakul's films and Syndromes and a Century again soon. 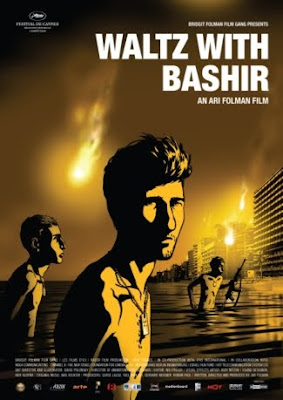 Waltz with Bashir, the only animated film to be nominated for the Best Foreign Language Film Oscar thus far, is quite fascinating for the way it approaches both the historical and the personal. It explores the events of the 1982 Israeli invasion of Lebanon, but not in a distant, documentary-like way. Instead, it is more along the lines of a personal account or confession as director Ari Folman, who partook in the campaign as a young man, tries to remember what transpired there and makes sense of dreams and images that he experiences. He tracks down and interviews several people involved in the conflict, some of whom he served alongside. By confronting his personal demons, Folman simultaneously conducts a sort of study of suppressed guilt that has afflicted Israel in terms of its past.

With its foggy borderline between historical fact and the dreams and memories of the Israeli soldiers, Waltz definitely makes the most of its animated form. Many of the images used to tell its twisty story are quite beautiful and surreal, dipping into Fellini-esque territory at times while keeping true to the brutal realities of the Lebanon conflict, which are gradually revealed as the film continues in an intriguing, detective-like fashion that keeps you hooked. Its conclusion is marked by a stylistic move that is daring, drastic and extremely effective in its emotional resonance - very much like a similar moment in Chris Marker's La Jetée.

Waltz with Bashir is much more than an animated documentary, anti-war statement or autobiographical confession. It is an imaginative journey to find truth in the murky depths of memory and time. 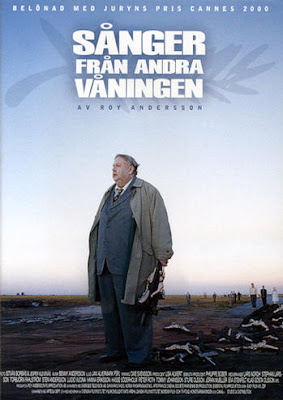 I had heard quite a bit about Roy Andersson, this film and his follow-up, You, the Living, which was recently released on Region 1 DVD, before catching it with a few friends at the Cinémathèque Ontario. I didn't want to miss the chance to see this one-of-a-kind gem on the big screen, and I sure wasn't disappointed. Following one poor businessman and the various people around him in a dark, depressing city, it has been described as Ingmar Bergman meets Monty Python, which is pretty accurate. Yet the figure I was most reminded of was Jacques Tati. Presented in only 46 shots (all but one of them completely stationary) with amazing visual compositions and great comedic details in both image and sound, Songs possesses the same kind of control, originality and social commentary as seen in films like Mon Oncle and Playtime, albeit with a nightmarish slant. I will definitely be checking out You, the Living before too long, so eager will I be to revisit the unique world of Andersson's imagination. 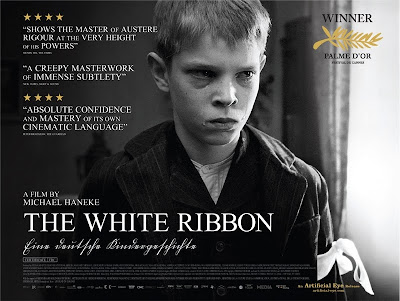 I was glad to finally catch Michael Haneke's latest, much celebrated film The White Ribbon, which of course won the Palme d"Or at Cannes. Set in a small German village shortly before the outbreak of World War I, it tells the story of a number of unusual occurrences that fall upon its inhabitants. A doctor's horse is tripped by a thin wire that mysteriously disappears before it can be more fully investigated. A woman falls through rotten floorboards at her place of work and dies shortly after. A barn catches on fire. Two children are tortured and left tied up in the woods.

As intriguing as these incidents may be in and of themselves, they serve a purpose similar to the threatening videotapes and drawings in Caché - the point isn't the discovery of the perpetrator(s), but rather the effects they have on the film's characters. In the village, they stir up a veritable hornet's nest of suspicion, distrust, simmering hatred and long-stewing resentment. While the village's severe, commanding adults (namely, its authority figures, which include the Baron and the Pastor) are most deserving of scrutiny, its children, who are often seen together in conspiratorial groups, don't always seem all that innocent either.

I'd very much like to see The White Ribbon again soon, if only to better take in its many secrets and messages. Apart from providing, in typical Haneke fashion, plenty of food for thought, the film is expertly paced and absolutely gorgeous, mainly thanks to Christian Berger's black-and-white cinematography, which was apparently inspired by Sven Nykvist's work for Ingmar Bergman. While I have yet to see any of the other nominees for this year's Best Foreign Language Film Oscar race (including France's A Prophet), I would not at all be surprised to see Haneke up on the Oscar podium this coming March for this excellent, truly masterful achievement of his.
Posted by Marc Saint-Cyr at 10:02 AM No comments: