A few nights ago, I finally got around to watching this incredible film from the great Bengali master Satyajit Ray. This vid (part of Criterion's brilliant Three Reasons ad line) does a pretty good job of illustrating some of its highlights. Actually, it's one of the more dynamic videos in the series - due in no small part to both cinematographer Subrata Mitra's dynamic, Scorsese-esque (to me, at least) camera movements and the incredible, exhilarating music edited to the images. Check it out for yourself:

Posted by Marc Saint-Cyr at 6:07 AM No comments:

Hello all. Marc here with a quick post regarding two film book-related tidbits for you. Firstly, John Berra, editor of such books as Directory of World Cinema: Japan and Directory of World Cinema: American Independent and current lecturer of film studies at China's Nanjing University, has recently released the cover image (see below) for the upcoming Directory of World Cinema: Japan 2, which he also edited. The new book will, like the first, feature reviews and essays covering various subjects in the world of Japanese cinema. Contributors include myself as well as fellow J-Film Pow-Wow writers Chris MaGee, Matthew Hardstaff and Bob Turnbull. Using an image from Tetsuya Nakashima's film Kamikaze Girls, it looks like the folks at Intellect behind the design decided to really run with the pink motif! The book will be released sometime in 2012. 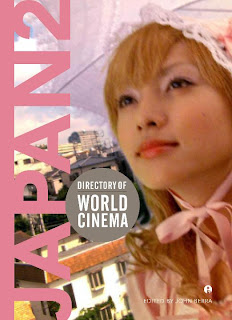 Speaking of film books, there's a site that I've been meaning to plug here for some time now that covers in remarkable detail the goings on in the world of film writing. It is Toronto Film Review, run by fellow Toronto cinephile and film literature devotee David Davidson. Over at his blog, you'll find monthly editorials, book reviews, news and write-ups on film-related goings-on in Toronto and more. The easily detectable passion and incredible depth of David's pieces alone make his site worth visiting - check it out!

Hello all! After having recently spent a relaxing stint in northern Ontario cottage country and, before then, kept fairly busy with various writing projects here and there, I have quite a bit to report regarding my goings-on in the film community! Let's dive right in, shall we? 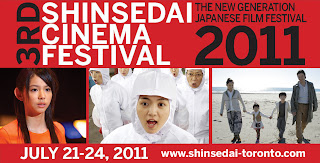 * At the end of July, the 3rd Shinsedai Cinema Festival came and went through Toronto, bringing with it a slew of great independent Japanese films, including Fumie Nishikawa's The Azemichi Road, which won the festival's Kobayashi Audience Choice Award; Koji Fukada's Hospitalité; Keita Kurosaka's Midori-ko; Ryugo Nakamura's The Catcher on the Shore and Neil Cantwell and Tim Grabham's KanZeOn. You can read a brief overview of the festival I wrote for the J-Film Pow-Wow; in addition to that, I'll have a more in-depth report posted at Midnight Eye sometime in the future. 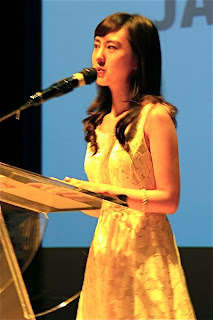 * During the festival, I had the opportunity to interview a special guest - Kiki Sugino, who has served as an actor and producer on Hospitalité, which was the festival's opening night film; Edmund Yeo's short film Exhalation and Kah-Wai Lim's Magic and Loss. In the time I was allotted, we covered a good portion of topics regarding her career, collaborations with various directors and cultural background. Read the full interview over at the VCinema Blog! 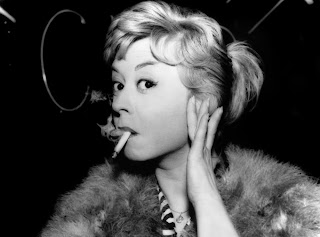 * Meanwhile, over at Toronto Film Scene, I'm continuing my little series of pieces on the TIFF Bell Lightbox's Fellini/Felliniesque: "Dream" Double Bills film program that has been going on over the summer, tying in with its Fellini: Spectacular Obsessions exhibition. Earlier, I had written on Miranda July's pairing of Fellini's La Strada with Jane Campion's An Angel at my Table, while most recently I've submitted a piece on Deepa Mehta's selection of Nights of Cabiria with Satyajit Ray's Devi. Expect at least one more to land on the site before this fascinating program is up - and while you're at it, go check out some of these films or the ones in the Lightbox's thematically linked Days of Glory: Masterworks of Italian Neorealism program. 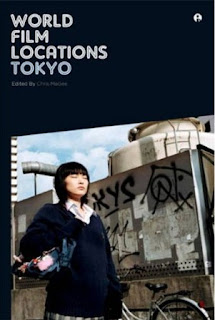 * Finally for now, a few days ago marked the release of a new book from Intellect that I contributed to: World Film Locations: Tokyo, which looks at some notable sites and sights throughout the city that have popped up on movie screens in productions both Japanese and otherwise. It was edited by my buddy at the J-Film Pow-Wow, Chris MaGee, and features pieces from a whole slew of writers and film folk who I'm very lucky to count among my friends and acquaintances. They consist of *deep breath* the Pow-Wow's own Matthew Hardstaff and Eric Evans, Nishikata Film Review's Catherine Munroe Hotes, VCinema's Jon Jung, Midnight Eye's Tom Mes, Directory of World Cinema: Japan editor John Berra and Japanese Canadian Cultural Centre Executive Director James Heron, among many more talented contributors. If you're interested in picking up the book, you can follow this link to Amazon.ca or check any convenient online retailer or hip bookstore near you!

Posted by Marc Saint-Cyr at 1:05 PM No comments: