The news that Broken Embraces, the latest film from Spanish auteur Almodóvar, was selected to compete for the Palme d'Or in this year's Cannes Film Festival inspired me to revisit Volver, his previous film. Seeing it again reminded me of the filmmaker's great talent for weaving together stories made especially for women. They have remained an extremely significant motif throughout his career, and Volver is a stellar example of how admirably he uses them.

Penélope Cruz gives an excellent performance as Raimunda, a strong-willed woman who lives with Paula (Yohana Cobo), her teenage daughter, and Paco (Antonio de la Torre), her good-for-nothing husband. She also keeps in close touch with Sole (Lola Dueñas), her sister, and Agustina (Blanca Portillo), a friend of the family. In the first act, Raimunda must contend with two deaths: her Aunt Paula's, and, after he attempts to sexually assault his daughter, Paco's after he is stabbed with a kitchen knife. Additionally, she and her sister begin hearing and noticing strange things that suggest that the ghost of their mother, who is believed to have died in a fire, is lingering around them. Along with these events, Raimunda takes over a friend's restaurant and helps feed a visiting film crew, enlisting the help of her neighbors while managing both business affairs and the escalating developments surrounding Sole, Agustina, events of the past and the mysterious presence of her mother. 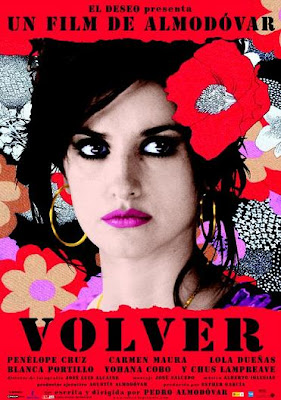 Volver is quite interesting partly because of the way it overturns certain expectations that some viewers may have going into it. Specifically, there are quite a few elements presented that would be right at home in a murder thriller or a ghost story - being namely Paco's body, which is temporarily hidden in the restaurant's freezer under many peoples' noses, and the appearance of Irene, Raimunda and Sole's mother (played by veteran Almodóvar actress Carmen Maura), who is at first suspected of being a restless spirit. However, these various things, though at first intriguing, eventually turn out to be red herrings, as the real theme of the film becomes and steadily remains focused on the bonds of family.

Then again, it should be no surprise that Volver doesn't dissolve into a simplistic genre flick since it thoroughly and undeniably remains an Almodóvar film throughout its entirety, meaning that it has a specific look and feel to it that is simply part of his signature as a filmmaker. Indeed, there is little doubt that Almodóvar is one of the most successful auteurs working in world cinema today, and Volver further continues the practice of his unique style. Thanks to the cinematography of José Luis Alcaine, the film is bright and lush, making marvelous use of primary colors - especially red. Consequently, the atmosphere remains consistently good-spirited, and even though some of the events are dramatic and even tragic at times, Volver never plunges to the gloomy level of, say, a Lars von Trier film (at the beginning of the film, Raimunda is seen working a number of lower-end jobs to make ends meet, but have no fear: Dancer in the Dark this ain't). Overall, one comes away from the film with an uplifting sensation, due to both the rewarding course of the narrative and the simple pleasure of seeing, both in front of the camera and behind it, work well done. 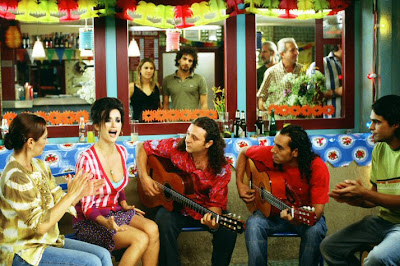 Overall, it was quite satisfying to see Volver again, and if anything, it will serve as a reminder for me to seek out more of Almodóvar's work in the future - and to root for him and Broken Embraces at Cannes this May!
Posted by Marc Saint-Cyr at 9:31 AM 2 comments:

Like many, I was mildly surprised when the Oscar for 2006's Best Foreign Language Film went not to Guillermo del Toro's spellbinding masterpiece Pan's Labyrinth, but instead to this German-made thriller. However, after having finally seen it, the so-called upset is not so hard to believe after all. Combining historical significance with ample doses of suspense and character development, The Lives of Others is irrefutably one finely made film.

The story begins, quite appropriately, in 1984 within the socialist regime of East Berlin. A celebrated playright, Georg Dreyman, is chosen as the target of a surveillance operation by the much-feared Ministry of State Security (Stasi for short). Weisler, a diligent Stasi agent, carries it out, bugging the apartment where Dreyman lives with his longtime girlfriend Christa-Maria and listening in on their lives in the attic above them. However, when he discovers that the mission is meant to aid a despicable minister's goals, Weisler begins to have second thoughts and eventually develops feelings of genuine admiration for the couple. Matters are further complicated when Dreyman becomes more involved in suspicious activities while under the false impression that he is safe from the Stasi. 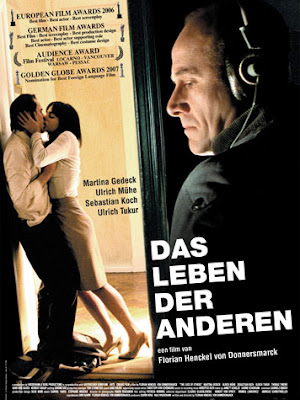 The Lives of Others is a genuine pleasure to watch for both its design and execution. The storyline is tautly crafted, providing a perpetual air of tension surrounding the people living under the malevolent, Big Brother-like gaze of the Stasi. Suspense is created not only through the main storyline surrounding Dreyman and whether he will be caught, but also a number of other subplots that act as seperately burning fuses, hinting at potential disaster at any moment. Matching the film's superb structure are its fascinating characters, all impressively acted. Sebastian Koch is suitably excellent as Dreyman, the artist struggling to maintain both his safety and a clean conscience, and Martina Gedeck does a fine job portraying the complex Christa-Maria. Ulrich Tukur makes a strong impression as a friend and superior to Weisler (especially in the tense scene that takes place in the cafeteria), but if there is any one actor to admire the most in the film, it would have to be Ulrich Mühe as Weisler himself. Ultimately, the film is telling his story, being that of someone who is at first a cold-hearted bloodhound for the Stasi, then experiences an awakening of sorts, gradually realizing the harm and consequences of his actions and doing his best to make compensation. Sadly, Mühe passed away from cancer in July of 2007, but The Lives of Others stands as a tribute to his remarkable talent - particularly in the film's eerily fitting final freeze-framed shot.

Recreating life in a fascinating yet terrible era of Germany's history, The Lives of Others is informative while never faltering in its devotion to narrative and character. Quite simply, it is a great story told in exactly the right way, hooking its audience and keeping them riveted on every twist and turn that unfolds before them. Without a doubt, I highly, highly, highly reccomend this one.