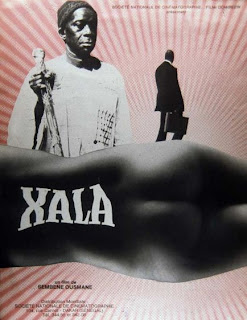 Plot: Xala opens with a significant political event that foreshadows the rest of the film: in a moment of triumph and pride, Senegal's white, French rulers are booted out of office by native officials - only to be kept on as advisors*. This contradictory move gives way to the preparations being undertaken for businessman El Hadji's (Thierno Leye) wedding to his third wife. During his lavish reception, he seems content, but trouble arises when he fails to do just that on his wedding night - he is impotent, made so apparently from a xala - a curse. As El Hadji desperately searches for a cure, his reputation and business collapse around him, forcing him to come face-to-face with his own faults.

Thoughts: I truly appreciate a good piece of social satire. When done well, it can reveal fascinating insight into a country or culture's defining characteristics, deliver important critiques and calls for change and be extremely entertaining in the process. Xala fits all of those criteria marvelously. Ousmane Sembène, one of Africa's most beloved and respected filmmakers, adapted his own novel into this darkly funny film that takes dead aim on the African ruling class and their blatant fixation with European culture and lifestyle. All throughout the film, El Hadji and his upper-crust colleagues surround themselves with lingering symbols of whiteness - suits, imported goods ranging from foods to cars, the French language, which they proudly speak instead of Wolof, which is used by other characters (with pride, in some cases). Some African customs are adhered to - but only the ones that suit the men, like the taking-on of multiple wives. While El Hadji subscribes to that practice all too enthusiastically, he is less accommodating to one involving sitting on a mortar and holding a pestle between his legs that will aid his virility - perhaps having something to do with his later misfortunes? In any case, El Hadji is soon humbled by the xala as his wives and colleagues turn their backs on him, and gradually realizes that the solution to his problems won't come from any foreign good or ideal, but rather the customs and beliefs of his native culture.

Xala is populated by a considerable selection of supporting characters beyond El Hadji, each of their stories seeming to carry additional comments on the social conditions around them. In one great scene during El Hadji's wedding, his first two wives sit and talk openly about their feelings of disgust and jealousy surrounding their new, younger rival. Throughout the film, Sembène drops in on a group of impoverished beggars and cripples who wander from one place to another before executing a most delicious revenge on the upper class. One tragi-comic plotline involves a farmer whose money from his meager crops is stolen by a pickpocket. Too ashamed to return to his family and workers empty-handed, he takes refuge in the city while the thief reaps the benefits of his handiwork.

What is truly admirable about Sembène's craft is how he expresses his ideas with bite, cleverness and clarity. The central theme of culture clash is broadcasted perhaps most powerfully in a scene between El Hadji and his daughter in his office. The desk in the middle of the room is just one of the things that separates them: while he wears his suit and tie, she is clad in a bright African outfit of green, yellow, blue and purple - which happens to match a map of Africa on the wall behind her (which I'm sure was no accident). The wall behind El Hadji, on the other hand, is blank. She refuses his offer of water by saying she doesn't drink imported water, to which he proudly replies that he drinks at least two litres of it every day. It is made utterly clear that father and daughter are occupying completely different planes of thought, opinion and culture. She knows without any doubt who she is and where she comes from, whereas he is on shakier ground which crumbles away bit by bit as the film goes on. 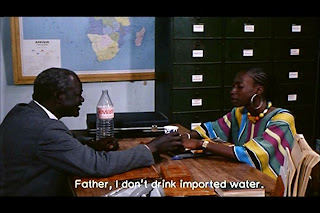 Final Words: Xala is one of Sembène's better-known films, and I don't think it'd be going too far to call it a classic of not only his work, but African cinema in general. Those curious to see more films from this side of the world would do well to seek out this intelligent, entertaining statement on cultural allegiance and morality.

*Senegal became officially independent from France in 1960. Whether Xala is a period piece set during that time or not is unclear, though I'd personally guess that Sembène set the film in the (then-)present day and devised his own fictitious, alternate history of Senegal in which to stage his satire.
Posted by Marc Saint-Cyr at 4:12 PM No comments:

*Hello all. Just a few quick words before the film review, which will be the first one on this site to use a new format that will hopefully allow for briefer, more frequent posts. From now on, I'll be using three short sub-sections per review: Plot, Thoughts and Final Words. Their contents should be pretty self-explanatory, and this format will both make it easier for me to churn out my thoughts on the films I watch and give you more content that'll be easier to decipher than the older, lengthier reviews. Thanks for reading, and enjoy! 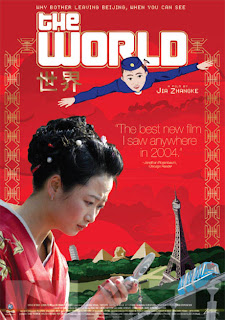 Plot: Tao (Zhao Tao) is a young woman who lives in and works at the World Park in Beijing, which features such attractions as models of famous landmarks from around the globe and live shows put on by performers dressed in costumes from different cultures. Tao is in a relationship with Taisheng (Taisheng Chen), who followed her to Beijing and works in the park as a guard. They undergo a period of strain and doubt mainly caused by Taisheng's dissatisfaction with her. Other characters are focused upon throughout the film, including a new Russian employee named Anna (Alla Shcherbakova) and other workers, including "Little Sister," a childhood friend of Taisheng's.

Thoughts: The fourth feature film from Jia Zhangke and the first to be approved by the Chinese government, The World does quite well in delivering his easily apparent ideas about the ever-dominant trends of globalization. The park itself (a dream location for a director like Jia, and one that makes me wonder if he draws inspiration from Antonioni much like some of the New Taiwan Cinema's directors did) broadcasts quite clearly the sad, absurd commodification of history and culture with its models of the Pyramids, the Eiffel Tower, the Arc de Triomphe, the Pyramids and the Leaning Tower of Pisa (which, comically, people still pose with as if it were the real thing). By such a place as the World Park existing, actual countries and cultures are subjected to broad, stereotypical generalizations by being represented only by their best-known landmarks and fashion styles while travel itself is devalued (one of the slogans chirped by the park's recordings is "See the world without ever leaving Beijing!").

Besides themes and ideas, Jia also makes sure to flesh out the lives of his characters, many of whom work in different areas of the park by day and tend to chores in their dingy, dorm-like accommodations by night. The issue of money pops up numerous times throughout the film, perhaps most devastatingly in Anna's struggle to make a living in Beijing, the prospect of hostessing that is dangled before Tao at one point and the sad fate of "Little Sister" after an accident on one of his night shifts. Certain scenes stand out for their tragic quality and make The World an insightful and heartfelt cautionary tale of the pitfalls of industrial progress.

The World's story is peppered with several amusing animated segments that add small splashes of color and style to the film. Significantly, each segment springs from text messages, giving an almost mythic quality to the social media format that has only become more widespread since 2004. Lim Giong, who provided the music for Hou Hsiao-hsien's Millennium Mambo and a number of Jia Zhangke's other films (inlcuding Still Life, 24 City and I Wish I Knew), creates a score that fittingly alternates between upbeat and contemplative. One other notable stylistic feature is Jia's use of chapter headings at certain points, emphasizing specific passages and lending some structure to the film's events. Significantly, one chapter is entitled "Tokyo Story." That is no accident, as Jia also uses an excerpt from the famous Ozu film's soundtrack as the camera lingers on a crestfallen mother and father sitting together.

Final Words: The Ozu references may at first seem out-of-place for a film like The World, especially considering how little Jia focuses on the subject of family (as Ozu did throughout his career). Yet one can draw similarities between the two directors in how they each approach their respective themes with great degrees of patience, insight and compassion. Thus far throughout his career, Jia has kept his gaze firmly fixes on issues stemming from his country's race towards change and progress - and, judging from his international reputation, has reached a fair amount of success doing so. The World gives a pretty clear idea of what he is capable of as both a social critic and an artist, and presents his relevant ideas in a highly effective manner.
Posted by Marc Saint-Cyr at 2:55 PM No comments: