Hello all. With New Moon madness now upon us here in North America, I thought the best way to put an end to my recent hiatus would be a fresh attack against the Stephenie Meyer-penned, dreamy teen boyhunk vampires 'n' werewolves phenomenon, hitting it with a double-shot of alternatives for the jaded, sick and tired vampire fans of the world. Of course, avoiding vampires altogether is an effective option that many have probably taken at this point - and I don't blame you. But reconsider giving up the fanged figures completely if only to give these interesting works a chance. Without further ado... 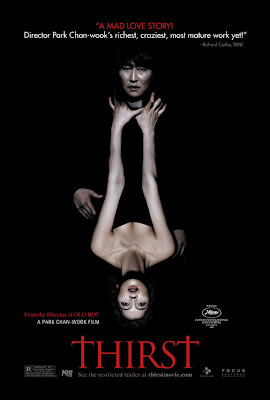 I'm a huge admirer of Park Chan-wook's work. He is one of those filmmakers who truly knows how to use and develop his own cinematic style, resulting in films that are visually splendid, thematically fascinating and quite often downright brilliant. Ever since Cut, his segment of the Asian horror omnibus film Three...Extremes which opens with a film crew shooting a vampire film, fans have been teased with hints and rumors of his full-length, fully-fledged horror film. Now we have Thirst, which just recently came out on DVD (in Region 1) and tells the tale of a priest (Park regular Song Kang-ho) who volunteers for a medical experiment and ends up receiving blood from a transfusion that turns him into a vampire. As he adapts to his new "condition," he meets the sexually provocative Tae-joo (Kim Ok-vin), with whom he forms a complex and dangerous relationship while grappling with feelings of guilt from the evil deeds he is driven to do.

I have yet to see Park's eccentric comedy I'm a Cyborg, But That's Okay, so this was essentially the first new film of his I was seeing since the excellent Lady Vengeance - and boy was it good to come back to his world. All of his recognizable visual trademarks are there - creative transitions and camerawork, vivid colors, beautifully grotesque displays of violence. However, the mood of the film was something that occasionally threw me. There are, of course, moments of real dramatic weight and horror, but every so often, Park takes a swerve into comedy, the most obvious (and disappointing) example being Tae-joo's husband who, after being drowned by the vampire-priest, haunts the couple by appearing on their bed, sopping wet, grinning a huge, dopey grin. It's hard to believe this is from the same Park who used another drowned ghost - that of a little girl - to such chilling effect in Sympathy for Mr. Vengeance, a film so stark and hard-hitting that one wouldn't imagine there being any room for visiting spirits. Thirst also sports some of the dark, deadpan humor that Park used so well in certain moments of his Vengeance trilogy, but it ultimately lacks the driving focus that anchored his previous explorations of the dark side of the soul, instead going from intriguing to sexy to funny and back again.

While not one of Park's best, Thirst still has plenty to good stuff to sink your teeth into (pun not intended), including sumptuous visuals (the film is a blue- and white-hued wonderland), an excellent performance by Kim Ok-vin and a quite satisfying conclusion. 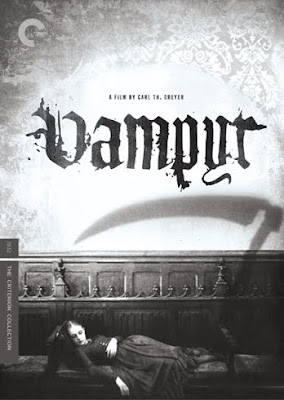 I'm now jumping from 2009 all the way back to the last days of silent cinema for one of the very first vampire films ever made - and still one of the finest. For what better filmmaker is there to combat the wave of inept filmmaking that the Twilight film series is producing so far (I'm hoping David Slade doesn't hit strike three with Eclipse, if only because I like Hard Candy so much) than Carl Theodor Dreyer, the Danish master who gave us The Passion of Joan of Arc? For Vampyr, he applied his unique style to the horror genre for the first time - are you detecting a pattern here? But unlike Chan-wook Park, Dreyer just about pulls it off flawlessly, producing a truly eerie atmosphere of misty fields, isolated houses and shifting shadows.

The narrative follows a young student of the occult named Allan Grey (Baron Nicolas de Gunzburg AKA Julian West, who also helped finance the film) who becomes enmeshed in sinister goings-on surrounding an old man and his two daughters Gisèle and Léone who are tormented by a vampire named Marguerite Chopin and her servant. Yet the plot is only secondary (and in fact leaves a number of things unexplained) compared to the mesmerizing realm into which Dreyer draws his audience. Just in the opening moments, with Grey's arrival at his strange inn and the sight of an old ferry rider carrying a scythe, the film begins casting a spell through its imagery alone. The cinematography by Rudolph Maté seems to carve the shapes and figures out of pure ebony, and Dreyer, with a barrage of wallpaper patterns, silhouettes that move on their own and painting-inspired compositions, fashions a purely Gothic visual scheme (helped along by Rena Mandel's black dress-clad, heavily eyeshadowed Gisèle). The film's events are brilliantly accentuated by Wolfgang Zeller's ominous score.

While containing certain elements that anyone familiar with vampire movies should recognize, Vampyr certainly belongs in a class of its own, not a film so much as a strange, surreal fever dream bound to linger in viewers' minds.
Posted by Marc Saint-Cyr at 8:47 AM No comments: