My Debt and Gratitude to Roger 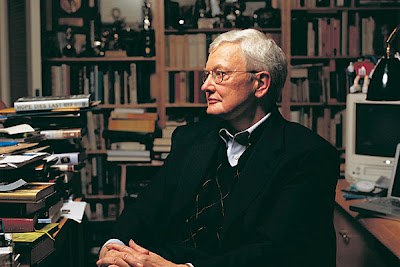 To me, Roger Ebert was always, first and foremost, a great writer. To this day, I have only ever seen a handful of clips of his famous televised critiques with Gene Siskel, and have not yet listened to the audio commentaries he recorded for such films as Casablanca, Citizen Kane, and Floating Weeds. His greatest influence upon me as a growing film viewer and critic was made through his invaluable collections of Great Movies essays, which for me still represent a high watermark of clear and intelligent writing. They exemplify that ideal goal of doing proper justice to what you observe in writing by grasping the various aspects and nuances of a noteworthy film and examining what makes it “great” with enthusiasm, insight, and eloquence. Those essays made me first curious, then excited to seek out films like Belle de Jour, Dr. Strangelove, Fargo, M, McCabe & Mrs. Miller, Pulp Fiction, Raging Bull, and so many others, so compelling were the words Ebert wrote about them. But far more importantly, he taught me with those essays how to properly study, process, and look at a film, then communicate my thoughts on it in a readable, down-to-Earth manner. Ebert’s writing is always inherently accessible and unpretentious, the ideal counterpoint to stuffy, over-analytical, dense academic writing. Ebert was certainly someone who had a keen understanding and appreciation of cinema’s unique qualities as an art form, but always strove to share his insights on the medium with the average reader, so that they may easily gain a better appreciation or understanding of a given film or filmmaker. He certainly had that effect on me, and it was through him that I learned to pick up on and savor certain things like the rich flavor of Quentin Tarantino’s dialogue or the strategies of directors like Krzysztof Kieslowski, Yasujiro Ozu, and Martin Scorsese or the subtleties at work in films like Fargo, Monsieur Hulot’s Holiday, The Rules of the Game, and The Music Room. As a result, I grew in both my film tastes and my confidence in writing about what I saw. Ebert’s razor-sharp senses of perception and generous willingness to share his findings helped me and countless others better understand the mechanics of cinema, and the simple, straight-forward, yet incredibly wise writing style he used to communicate his thoughts has been a lasting and irreplaceable source of inspiration for virtually everything I’ve ever written.
Simply through the incredible voice of his writing, which, poignantly, continued loud and clear for years after his real voice was cruelly stolen from him, Ebert became one of the best teachers I ever had – and I still very much feel that I have so much more to learn from him. While it is with a heavy heart that I accept that there will be no more new reviews or Great Movies essays, I am so looking forward to catching up with the wealth of material Ebert left behind. I can’t wait to read those Great Movies essays that I haven’t yet read. I’m about to order his book on Martin Scorsese, one of his favorite filmmakers, and I can’t wait to read that. I want to read and use his rice cooker cookbook, The Pot and How to Use It, which looks positively delightful. And most of all, I want to read his praise-lauded autobiography, Life Itself, and more of the pieces he wrote that venture beyond the movies into bigger, more philosophical topics like youth, memory, and the various things he believed makes life meaningful and special. And with every page turned, there will be my deep gratitude for all that he left behind for us to take pleasure in, learn from, and incorporate into our own lives. He was quite right to use the term “leave of presence” in his final blog post before his death, for he’ll never really go away – he’ll still be with us in the words he wrote and the lessons they will continue to impart. For all that we’ve learned and have yet to learn from you, Roger, thank you. Thank you.

Posted by Marc Saint-Cyr at 2:43 PM No comments: