I thought the best way to start up a brand new year review-wise here would be to shed some light on two films from one of the most respected directors on the other side of the world: Youssef Chahine of Egypt, who passed away in July of 2008. Throughout his prolific career, he worked in a number of different genres and produced a quartet of autobiographical films known as the Alexandria series. I recently watched the first two: 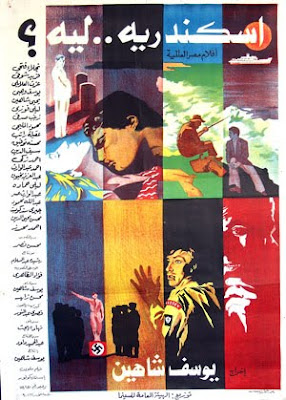 Alexandria...Why? is, at its core, a coming-of-age story set in the titular Egyptian city during World War II. Its main character is Yehia (Mohsin Mohieddin), a movie-crazy young man who spends most of his time wandering the town with his friends, catching films at the theatre and putting on lively stage performances that satirize the war and its participants (British, Italians and, most prominently, Hitler and his Nazi followers). Essentially, Yehia is a dreamer who harbors high hopes of becoming an actor - hopes that run contrary to his family's plans for him (which include a career as an engineer and a full-time job at a bank that he holds for a short period of time).

Perhaps the most striking thing about Alexandria...Why? is its dizzying tone. At times overflowing with melodrama, the film is messy, loud, energetic and highly emotional, often deploying bombastic musical flourishes and jumping from one scene to the next. Overall, I found myself very strongly reminded of Federico Fellini's similar circus-like style, particularly as seen in later films such as Amarcord (and indeed, with its focus on town life, youth and fascism, Alexandria...Why? shares much in common with that specific Fellini film). There are also moments of religious guilt that recall similar scenes in 8 1/2.

Apart from Yehia and his friends, the film tracks a few other characters in smaller story strands, including a relationship between a wealthy Arab and a young British soldier with shades of homo-eroticism and a group of guys who humorously scheme to capture Winston Churchill in order to put an end to the war. Chahine makes extensive use of stock footage, grounding the film's events in its historical context while continually sweeping the viewer away from one scene to the next. In its final moments, the film finally hits upon a solid plot thread that follow Yehia's family as they scramble to find the money needed to send him to New York to study acting. Leading up to that (and even during that hectically-paced sub-plot), it is a veritable emotional roller coaster, going from excitement, to tears to laughs and back again. It makes for a jarring and unpredictable viewing experience, but I still found myself liking Alexandria...Why? very much, and curious to see what Chahine had to offer with his next entry in the series.

I thankfully found An Egyptian Story to be much more focused than its predecessor. It returns to Yehia (Nour El-Sherif), who is now an acclaimed filmmaker. Overcome by stress during the shoot of his latest film, he is forced to go into heart surgery - which gives way to a fantasy in which he is put on trial by his conscience, forcing him to look back at his past, the people in his life and his steady path of progress as an artist. 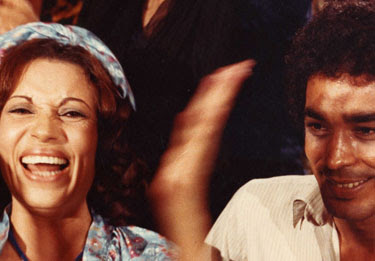 An Egyptian Story certainly contains traces of the same tumultuous, emotional melodrama on display in Alexandria...Why?, but this time limited to certain passages - most notably the court scenes, shot in a creatively constructed set made to resemble Yehia's body (ribs serve as overheard arches, and tubes flowing with blood and other fluids are easily visible). Once again, I was very strongly reminded of both the energetic bustle and nostalgic tendencies of Fellini's work, with, this time, 8 1/2 being the clearest counterpart in both tone and subject matter, though An Egyptian Story is very much its own film. Personally, I found its best parts to be the scenes that follow Yehia's numerous experiences and adventures as a filmmaker, which include a less-than-perfect visit to the Cannes Film Festival and an unexpected trip to Moscow, both to promote films of his. At this point, it is worth noting that this film quite directly presents Yehia as an alter-ego for Chahine (even more so than Alexandria...Why?). The main hint is given through Yehia's films' titles (among them Cairo Station and Jamila) and plots, which are identical to ones from Chahine's own filmography. Once again, New York is portrayed with much reverence and affection, and Mohsen Mohieddin returns to play the young Yehia.

Ultimately, I was much more on board with this film as it charted its strange, unique course through Yehia's life and explored his relationships with his wife, daughter, mother, father and friends and collaborators. Altogether, though, I was quite glad to finally be able to see some of Chahine's films, and was pleased with what his first two autobiographical works had to offer. I hope to soon see the other two in the series (entitled Alexandria, Again and Forever and Alexandria...New York) as well as older works of his (at the top of the list would be Cairo Station, which, from what I've read, is easily one of Chahine's most noteworthy films).
Posted by Marc Saint-Cyr at 7:51 PM No comments:

Here are two last picks for 2009: my favorite actors of the year.

Actor of the Year: Mathieu Amalric 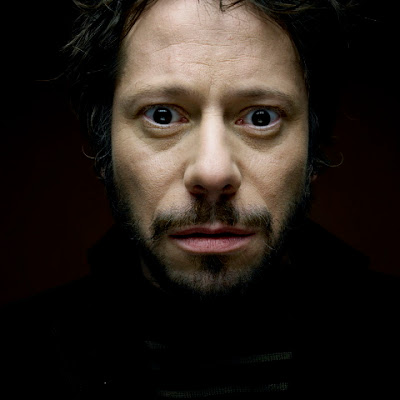 Yes, I am fully aware of how excellent Christoph Waltz is in Inglourious Basterds, and if there is any justice whatsoever in this wicked world, we'll see him accepting his well-deserved Oscar in a few months. But for me, the actor who kept popping up and grabbing my attention was Mathieu Amalric. Most people know this distinctive, charismatic actor from his turn as Dominic Green in Quantum of Solace, which I revisited a few times on DVD this year. Besides that, he turned up in two films I saw at TIFF: Les derniers jours du monde, in which he provided a solid lead performance at the centre of an interesting yet somewhat unfocused end-of-the-world film, and Tsai Ming-liang’s Visage, in which he randomly turned up for one scene. Add to that his excellent job in Arnaud Desplechin’s A Christmas Tale, a film I just love, and the news that he got to work with Alain Resnais in Wild Grass, and it seems he was everywhere this past year. I will definitely make an effort to see more of his stuff within the next year, namely the highly acclaimed The Diving Bell and the Butterfly, Desplechin’s Kings and Queen, which will be screening at the Cinémathèque Ontario in late February, and Wild Grass, if it ever gets a release date over here (and I certainly hope it does, as I am very, very curious about it).


Actress of the Year: Mélanie Laurent 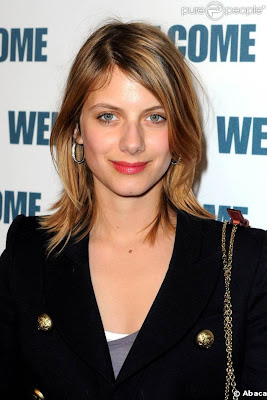 Yup, it seems I'm going all French with my actor picks for 2009 - but considering the actors, that's perfectly fine with me. And as much as I enjoyed seeing Vera Farmiga, Anna Kendrick, Zooey Deschanel, Zoë Saldana, Diane Kruger, Laetitia Casta and Fanny Ardant onscreen, the one who really shone this year was Mélanie Laurent as Quentin's latest female avenger Shosanna in Inglourious Basterds. The scene with the red dress and the Bowie says it all, but she is terrific throughout the whole film - her tense meeting with Hans Landa over strudel, her cool attitude towards Daniel Brühl's persistent Fredrick Zoller, her clear love for cinema, her tender relationship with Jacky Ido's Marcel. Yup, she really knocked it out of the park, and I'd love to find more films with her (like Jacques Audiard's The Beat That My Heart Skipped, which I've heard great things about, and the recent Paris, starring Juliette Binoche).