First of all, sorry to all for not posting a little more often than I probably should. I've actually been quite occupied recently, particularly in exploring the ether of Japanese cinema on a number of fronts (including my other blogging commitment, the Toronto J-Film Pow-Wow). In any case, I'll try to make up for it and up the dosage of reviews over the next little while.

Now we get to one of my favorite films by one of my favorite directors: François Truffaut's Day For Night. Wonderfully showcasing Truffaut's trademark humanism, it follows a film crew as they face the day-to-day challenges of making a movie. Over the course of their shooting schedule, their various crises include a veteran actress who can't remember her lines (Valentina Cortese, who worked with Federico Fellini in Juliet of the Spirits, a fact that her character alludes to), various love affairs among the cast and crew, secretive actors and one reluctant kitten. Filling out the impressive cast are the stunning Jacqueline Bisset, Alexandra Stewart, Jean-Pierre Aumont, Truffaut stalwart Jean-Pierre Léaud and, most interestingly, Truffaut himself as none other than Ferrand, the director.

As is usually the case with Truffaut, Day For Night is filled with a variety of great little elements and sketches, patching together an entertaining and truth-infused imitation of life. Even as he reveals the tricks of the moviemaking trade, he keeps the people who live by it at the forefront of the film, bringing them to life as colorfully drawn individuals. In reference to a quote from Truffaut's longtime comrade and friend Jean-Luc Godard, just as the cinema isn't the station, but the train, the main concern of this movie isn't whether the film will be made, but instead how the film crew will make it - their journey as opposed to their destination. And what a journey it is, riddled with its share of crises and even grim moments, but nonetheless a joyful and satisfying one.

I revisited this film after finally giving Synecdoche, New York its much-deserved second viewing, and it's interesting how the two both compare and contrast. While both are about the process of making art (specifically, autobiographical art), Charlie Kaufman's wonderfully unique and mind-boggling film dwells in the agony and, it seems, futility of capturing an accurate representation of life in art, while in Truffaut's film, everyone just gets on with it, living their lives as they throw themselves into their work, all in a film that, as is usually the case, is chock-a-block full of details from Truffaut's own life and previous films. Like the camera which at one point turns to regard the audience (no doubt a nod to a similar moment in Godard's Contempt), Truffaut in turn flips his camera around onto himself to examine the craft that he has devoted his life to, making a funny and light-hearted salute to the cinema and the people who literally populate it (all while avoiding becoming bogged down in figuring out the various aspects and relationships of his life, unlike Philip Seymour Hoffman's character in Synecdoche). In a way, it stands as a key to better appreciating his own work. While it has never been as radical or daring or even as interesting (at least on a formal level) as that of Godard or Agnès Varda, that was never really the point. Instead, the point is the work itself; the film that weaves together an artificial world in front of your eyes. Most films are like magic tricks that are judged by their impressiveness or spectacular qualities; Truffaut's magic simply lies in the illusion itself that he and many others have, against all odds, managed to pull off time and time again - all for your viewing pleasure.

To cap off this review, I have two relevant add-ons. One is another picture I took of a film shoot I encountered in Paris during my trip to Europe last year which seems to embody the cinema of Truffaut - particularly in its depiction of three reoccurring elements in his work: cinema, children and the Eiffel Tower, which he often prominently featured. Note great little details like the various crew members captured in mid-action and the passing bus, both of which bringing to mind Day For Night's classic opening street sequence. 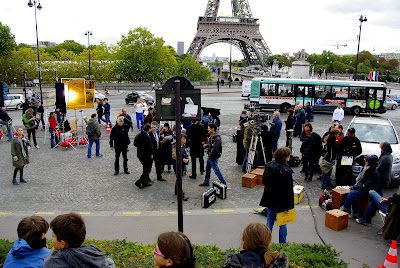 The other is this marvelous American Express commercial which was made by and stars Wes Anderson (featuring his buddies and regular actors Jason Schwartzman and Waris Ahluwalia). This is a neat homage to Day For Night, complete with the music that was actually used in the film ("Grande Chorale" by Georges Delerue) and the names François and Jean-Pierre - a great treat for Anderson and Truffaut fans alike!

Posted by Marc Saint-Cyr at 1:58 PM No comments: