While this might not be a hidden gem or discovery for most people (but then again, it was for me), this was a movie that I wanted to write about, as a) I really enjoyed it, and b) it was one of those "must-see" movies on my endless "to-see" list that I felt deserved some recognition. Plus, it's a more-than-worthy film made by one of the UK's finest filmmakers.

Anyways, here it is: one of the great, essential classics of cinema that I had neglected for the longest time. Now, after pushing myself to finally sitting down and doing it, I can finally say that I have seen Lawrence of Arabia.

This is a film that, by now, has a reputation that well precedes it, and for good reason. Made by the great David Lean (who also helmed The Bridge on the River Kwai and Doctor Zhivago), it tells the story of real-life British officer T. E. Lawrence who was bold (and nutty) enough to gather together the Arab tribes and lead a full-scale revolt against the Turks during World War I. The absolutely grandiose and pitch-perfect way in which this story is presented on the screen is proof that great films are not only made with massive budgets and production teams, but also an invaluable degree of imagination and skill. A film without heart is an empty film, no matter how big it is, and Lawrence certainly has that heart. 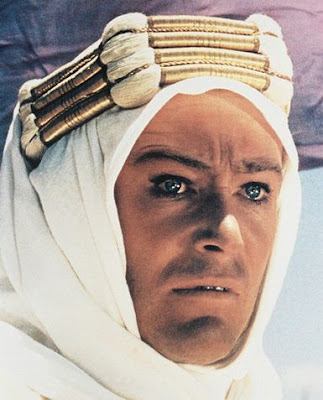 It goes without saying that a film as mammoth as this one is completely lost on the audience if they don't have a strong main character to latch onto, and they certainly get one in Peter O'Toole (who, amazingly, was still a relative newcomer to film acting at the time he made this). He is just great to watch as Lawrence, exuding charm, eccentricity, sensitivity and a sort of indescribable, hypnotic quality, all at the right moments. His Lawrence is utterly convincing as a man who only ever belongs to the ideas and beliefs that he feels most strongly about, national loyalty and military conduct be damned. Though the film's giant set pieces will stick out most prominently in people's minds, just as important to the film and this character are those quiet, gentle moments when Lawrence sits or paces by himself, lost in thought, his blue eyes staring out into the desert wastes.

Accompanying O'Toole is a slew of legendary actors doing fantastic work in their own roles. Omar Sharif's Sherif Ali, besides having the great, rightly famous entrance scene in which he emerges from desert heat waves on camel, works alongside Lawrence as an ally, advisor and friend, though their relationship is not without its fair share of tension. Anthony Quinn is delightful as the larger-than-life Auda abu Tayi, the leader of one of the Arab tribes. He is a bombastic force of a man who has such great lines as, "Thy mother mated with a scorpion," and, to a sheepish British officer, "Be thankful that when God gave you a face, he gave you a fool's face!" Also turning up are Alec Guinness as the Arab Prince Feisal and Claude Rains as a sort of aide to the British generals whom Lawrence reports to throughout the film. Of course, these are merely the main players, and the film is populated with a cast of what must have been thousands of people in the battle and crowd sequences, doing their part to (believably) create the grand illusion that Lean envisioned.

Of course, a major part of what makes this epic film so, well, epic, is the stunning cinematography by F. A. Young. Besides being devastatingly beautiful, the majestic desert settings are presented as monumental, ultimately indifferent forces of nature where men and camels are shrunk to the size of fleas and death is often (but not always) as simple as a camel suddenly missing its rider.

One of the things that I particularly liked about the film was how well crafted and well edited it was. Something I often have problems with regarding classic Hollywood cinema is that it can be a bit too theatrical and distanced, making it hard to grow attached to the characters or be genuinely moved by the events unfolding onscreen. Not so with this film, which brings a sort of documentary/National Geographic-esque sensibility to the way it frames people within the settings, be they travelling caravans, camps set up under the scorching afternoon sun or solitary figures marching through the sand for survival. Also, there's a kind of sensibility to the way in which certain scenes are arranged and presented which you can't help but be impressed and moved by. A specific transition I'm thinking of happens near the beginning of the film, when a close-up shot of Lawrence holding a lit match close to his face abruptly cuts to an extreme long shot of the vast, empty red planes of the desert just as the sun emerges on the horizon. It's a bold, highly effective move; something that wouldn't be out of place in a Stanley Kubrick film. 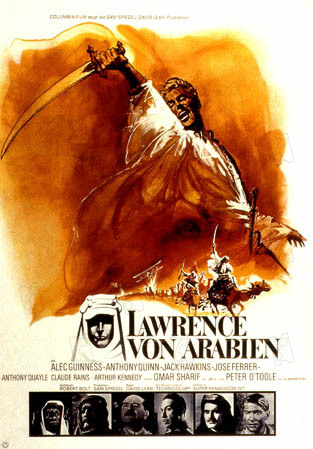 While I definitely could (and should) have seen this film earlier, I'm simply glad to have enjoyed the viewing experience as much as I did, and that it more than lives up to its status as one of the greatest films ever made.
Posted by Marc Saint-Cyr at 12:21 PM