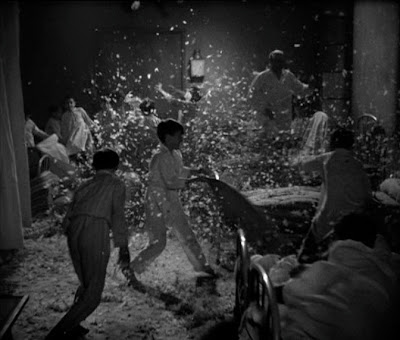 Hello all. Over the past week, I've been busy launching a new review column over at the film site Row Three that should prove to be of particular interest if you're a fan of French cinema. Essentially, every week I'll be posting a fresh review of a film that is either affiliated with or can be considered part of France's filmmaking culture. Through this column, titled Cinephilia Française, I hope to re-charge my film reviewing batteries while conducting a fun and far-reaching tour of the rich cache of artistic diversity that has stemmed from France throughout film history.

I've recently posted the first couple of reviews for the column, which cover Jean Vigo's classic rebel yell Zero for Conduct (1933) and Claire Denis' lovely homage to Yasujiro Ozu 35 Shots of Rum (2008). Click here to check out all the French film reviews that have been (and, in the future, will be) filed under the Cinephilia Française category tab, and check back regularly at Row Three to see what films I'll be tackling in the weeks ahead. For the next little bit, I'll be bouncing off of Zero for Conduct and exploring certain films that provide a not-so-sunny vision of revolutionary spirit, including a new title being shown at this year's Toronto International Film Festival from one of the finest French filmmakers working today. Stay tuned!
Posted by Marc Saint-Cyr at 12:02 PM