Director: Darren Aronofsky
Country: United States of America
Hello, all. This one comes straight from the Toronto International Film Festival, where it was just picked up by Fox Searchlight. It has been garnering tons of good reviews and won the much-coveted Golden Lion at this year's Venice Film Festival - all deservedly so. Director Aronofsky (whose previous films are Pi, Requiem For a Dream and The Fountain) trades in the impressive stylistic flourishes of those films for a more threadbare, straightforward approach, which is a fitting choice for this film's material.

As so many other reviews of the film will tell you, The Wrestler is about Randy "The Ram" Robinson, a washed-up superstar of the 1980s wrestling scene. Mickey Rourke's performance as Randy is nothing short of impressive as he ably channels the fatigue, nostalgia, sadness and loneliness of this tired, rusted engine of a man. Throughout the film, he attempts to come to terms with such challenges as his deteriorating health, the increasingly brutal fights that he partakes in, getting enough of an income to live off of and, most importantly, his relationships with Cassidy, an ageing stripper played by Marisa Tomei, and his estranged daughter Stephanie, played by Evan Rachel Wood. 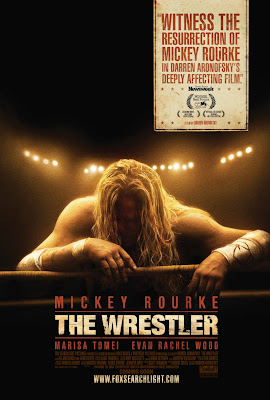 In Raging Bull fashion, The Wrestler focuses on Randy's life both in and out of the ring, though with substantially less domestic violence and stylistic excess than Scorsese's epic. Though not nearly as rough as the notorious Requiem, there are still traces of that film in this one, and I'd say those two films are the most alike in Aronofsky's diverse body of work so far. Like it, The Wrestler is steeped in gritty realism and has an almost mundane sense of everyday familiarity to it (particularly in the many extras who populate the film ranging from neighborhood kids to Randy's boss and customers at the grocery store where he works to the assortment of fans who attend his matches). Also, The Wrestler has a few remaining traces of Requiem's searing showcase of the ugly, often surreal capability of cruelty and humiliation that human beings often wield, here portrayed most overtly in (but not limited to) the brutal matches that Randy partakes in.

For the screening I attended, Aronofsky actually showed up to briefly introduce the film - a pleasant surprise for me, who was only expecting the movie. He made a few remarks about how well the film has been doing so far, and made a point of saying that this was really a small movie for him and therefore he wanted to lower the lofty expectations that might have been surrounding it. Finally, he spoke about how great it was to work with Mickey Rourke and concluded with a wise piece of advice that certainly applied to his experience of making The Wrestler: "When you have a great performance and a lens, that's all you really need." Full proof of that statement's truth shows in every frame of Rourke's performance. Let's hope this brings him the recognition he deserves for it.
Posted by Marc Saint-Cyr at 8:39 PM